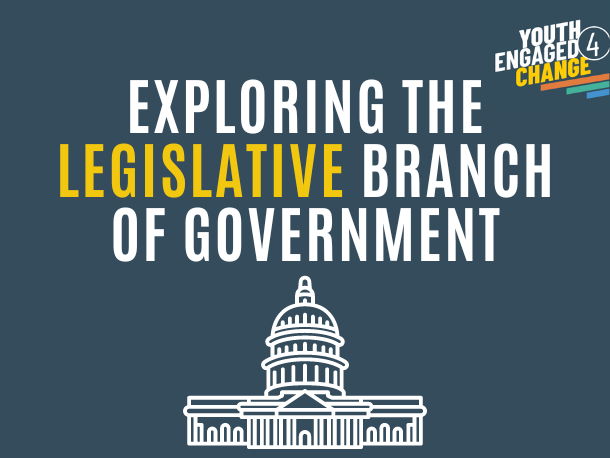 Why Learn about the Legislative Branch?

Politics and government influence your life in a lot of ways. You may not notice how government policies and officials affect your everyday activities, but their actions on the economy, taxes, and civil liberties, for example, do! The decisions made by government can heavily affect your life. Being part of the process is key to taking your future and your community’s future into your own hands.

You can benefit from learning about the structure and foundation of the government. For example, you can learn what branch of government you would most like to interact with or know who to contact to advocate for changes you want to see. If you would like to change the world and influence important decisions, you can start here. To start getting involved, you should first learn how the government works.

What Is the Legislative Branch?

The Legislative Branch includes the Senate and the House of Representatives at the federal, or national, level. They make up our “bicameral,” or two-house, Congress. The members of the Legislative Branch have two main roles: represent the people of their district or state (also called “constituents"), and write the laws that govern the United States of America. When making these laws, they must keep the best interests of their constituents in mind.

Congress has powers to declare war, impeach elected officials (such as the president), control taxes, and make and revise laws. The powers of the Legislative Branches are similar at the state level as well. Every state, except Nebraska, has a two-house law-making bodies. You can find your elected representative here and senator here.

How Are Laws Made?

The Senate and House work in different ways that depend on the amount of time they have in office and what they think will help their constituents most. For example, senators often have longer term and broader goals and visions because they represent an entire state. Representatives may work on issues that require a faster, more local response.

How Can I Get Involved in the Legislative Process?

The Legislative Branch often invites the public to give feedback on their work. Although there are many ways to share feedback, the two most common ways are lobbying and voting. These are great ways to get involved at the federal level!

Lobbying is any activity taken to influence government actions. Examples include writing a letter to your elected officials about a new bill or calling their offices to share your opinions. Lobbying can be from an individual (like yourself) or a group.

Lobbyists and people who lobby are different. “Lobbyists” are professionals who advocate as a representative for a company or other client. If you advocate for your own opinions and beliefs without payment from someone else, you are not a lobbyist and have fewer laws to follow. (Lobbyists have many rules about transparency and fairness to follow, and the lobbying process is more complicated.) You can learn more about the lobbying process from the Frank D. Lanterman Regional Center.

How Can I Choose Who Represents Me?

Voting is another way you can get directly involved in the legislative process. Although you may be more familiar with voting in presidential elections, you can also vote to choose your elected officials in Congress. Senators are elected every six years, and representatives are elected every two years. Congress holds general elections every two years. If an election does not take place with a presidential election, it is a midterm election (because it is in the middle of the president’s four-year term).

The powers of the Legislative Branch are similar at the state level as well. Every state, except Nebraska, has a two-house law-making body. Every state has local governments divided into “municipalities.” Examples include city councils, borough authorities, and county boards of supervisors. The elections for these positions differ for each state and municipality.

If you are at least 18 years old and a U.S. citizen, you can vote in your district’s elections. You can find more personalized election details at Vote 411. You can find out when general, midterm, and local elections happen at USA.gov.

Although this article covers the basics of the Legislative Branch, there are more concepts to discover and learn about. The Legislative Branch can seem overwhelming because of how many people and elections are involved. However, after learning more about it, you can engage with it in no time. What matters is that you get involved; if you can take the first step, the others will follow.

If you are interested in learning how you can get involved, make sure to look at the rest of this three-part series for a solid start on your journey to help voice your thoughts in government:

Being Engaged and Taking Action