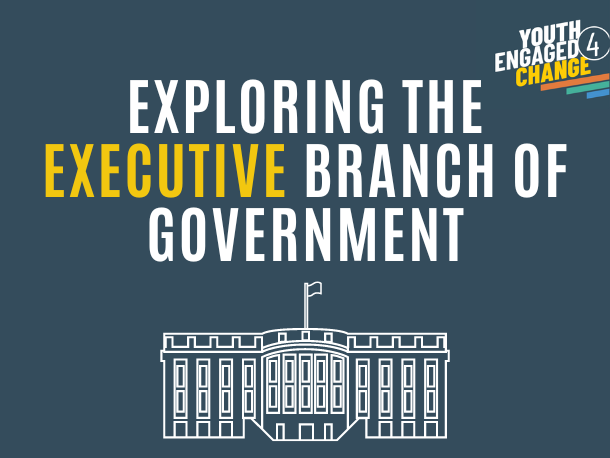 This is post 3 in a three-part series on the branches of the U.S. government.

What are some names of famous American leaders you think of? George Washington, Abraham Lincoln, and Barack Obama are likely names. U.S. presidents are some of the most influential people in the world. But why is the president important? And what does the president do?

This post will answer questions about the Executive Branch. Be sure to check out our other posts to understand the Legislative Branch, which writes the law, and the Judicial Branch, which interprets the law.

Why Does My Involvement Matter?

Though it might not seem relevant or important to you, future attitudes to civics—whether positive or negative—depend on our generation. The power of change comes from what we choose to do now.

What Is the Executive Branch?

The Executive Branch consists of the president, vice president, federal agencies, and the President’s Cabinet. As the largest branch of the U.S. government, this branch is responsible for implementing the nation’s laws. More than 4 million employees help carry out the thousands of laws, rules, and regulations.

What Does the President Do?

The president leads the Executive Branch and carriers out the laws written by Congress. As head of state, the president also serves as commander in chief of the military and negotiates treaties.

The president also appoints leaders of federal agencies. However, the Senate must vote and confirm some appointments depending on the level of the position. For example, Secretaries of federal agencies need Senate confirmation, but deputy assistant secretaries do not. Additionally, the president appoints ambassadors, who serve as overseas diplomats, federal judges, Supreme Court justices, and U.S. attorneys, all of whom are involved in the judicial branch. You can find out more about the judicial branch and how court cases work in the blog post titled “Exploring the Judicial Branch.”

Once Congress passes a bill, the president can sign it into law or veto it. Vetoing means the president rejects the bill because they believe the bill is unconstitutional or is not helpful to the nation. Congress can override a president’s veto through a vote in each chamber (House of Representatives and Senate).

The president can also issue executive orders, which are mandatory directions to control how the government operates. One example from January 2021 is Executive Order 13991, which mandated mask wearing and social distancing for all federal workers.

This link explains more about what the president does.

What Does the Vice President Do?

What Are the President’s Cabinet and Federal Agencies?

The Cabinet is a group that advises the president on policies and laws. The vice president, department heads, and Cabinet-level members make up the Cabinet.

A Secretary leads each executive department, with one exception. The head of the Department of Justice is called Attorney General. Learn more about the current members of the president’s Cabinet.

Federal agencies implement federal laws. Many agencies fall under the 15 departments. This is one of the ways the president can ensure that the laws are implemented in an effective way. By appointing the leaders of these agencies, the president sets the direction of the agency. The Senate must vote and confirm these appointments as well.

However, independent agencies like the U.S. Postal Services are also part of the Executive Branch. These are usually controlled by a commission or board made up of five to seven people, all appointed by the president.

Learn more about all agencies under the Executive Branch.

What You Can Do!

The Executive Branch is key to understanding the full picture of how the government operates. Understanding the three main branches is a great start to being civically educated and engaged.

If you are interested in learning how you can get involved, make sure to look at the rest of this three-part series for a solid start on your journey to help voice your thoughts in government: