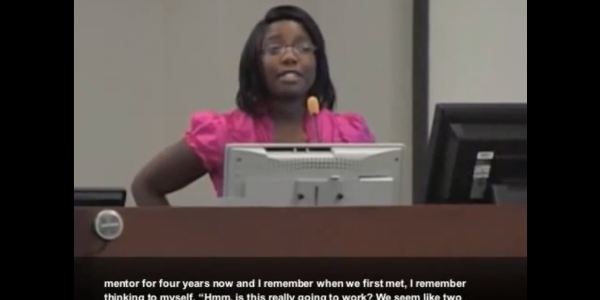 As she told you, my name is Chardae Anderson, and for the past four years I've been mentored through the Building Dreams mentoring program at Clemson University. The Building Dreams program is a mentoring program of children incarcerated. My caring and devoted mentor is Carol Stewart. She's been my mentor for four years now and I remember when we first me, I remember thinking to myself, "Hmm, is this really going to work? We seem like two different people." She was talking about hiking up a mountain, running miles, and I'm just like "Uhh, a movie here or there? You know, can we do a movie?" But she really opened my eyes and let me see what was beyond my reach. And I started looking at her just at first just being a mentor but she soon changed my view on that and I now see her as one of my best friends and a second mom to me.

So the relationship that we have is just, you know – although she's an adult, she's old – you know, stuff like that. But she's older than me but she doesn't look down on me just because I'm younger than she is. She looks at me as an equal. And although she is a parent and she's been through that and everything like that, she's my mentor and she lends out a helping hand, and she's like one of my best friends. I probably tell her more things that I tell my mom, my sister, my brother, anybody that I can think of she's probably like the first person I run to because she's, you know, she's been there, she's learned, she's made mistakes, and she's, you know, been able to talk to me and tell me what am I doing wrong. And, ok – I was young, I've been through you know, a lot of things, I've been in trouble with school and stuff like that, and I can honestly say that when I was younger I did have an attitude. Yeah, I had an attitude, I'm not even going to deny that, but Miss Carol showed me that, you know, I don't have to have an attitude. I have a beautiful smile and I can light up any room, and I just have to run with that. And I've struggled in life. Yes, I am a child of an incarcerated parent and statistics say that children with incarcerated parents face many difficulties. They're vulnerable to fear, anxiety, depression, anger, and stuff like that, and the behavior consequences can be severe, and they even say that children of incarcerated parents are six to ten times more likely to end up in prison than a normal teen. Well, I made up my mind a long time ago that I will not be another statistic. I will not follow anyone else's footsteps, I will not follow my father's steps, I will make my own decisions, make my own goals, and run with it.

Right now, I'm a sophomore at Clemson University, I'm studying to be a CPA, setting my own goals and I'm glad to say that on this journey, I could have my mentor right beside me.